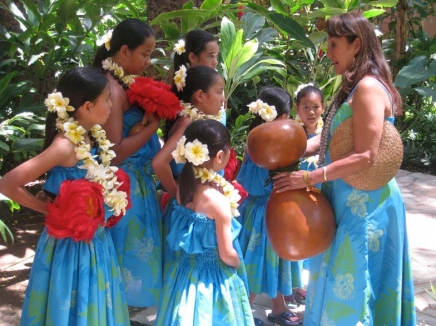 For nearly three decades, PA‘I offered its programs in a variety of temporary and unreliable spaces, including a school cafeteria. Dancers had to move furniture both before and after class, and PA‘I’s workshops and rehearsals were often suspended when schools needed their space for other uses. With LINC support, PA‘I was able to expand its programming, launch a website, and publicize its activities. Through an alliance with fellow LINC grantee First Peoples Fund, PA‘I artists received business training, and LINC connections also resulted in touring engagements for PA‘I in New York City and other locations. All these efforts strengthened PA‘I Foundation’s organizational and financial base, which allowed it to open a dedicated interim studio in 2011, and to plan for a permanent home scheduled to open in 2015.

“LINC’s support propelled this little halau into a national discussion of indigenous artwork and indigenous nonprofit organizations,” said Vicky Takamine. “Not many funders look to legitimize halau or recognize the social work and the social justice work that are part of our legacy in this community. LINC recognized that our community engagement and activism is not limited to the activities of the halau, but extends to other forms and concerns of cultural and political expression in the greater native Hawaiian community. We are focused on tradition, social justice, and arts and culture. And we are not alone. There needs to be more funding to support this work—ours, and others like us.”

“Artography brought a richness to the LINC network.”